Thanks to Cecily Baptiste and Neil Laffra for putting this article together.

Numerous volunteers participate in the “egg takes” when adult fish are netted and eggs or milt are extracted, brought back to the hatchery, and the eggs are fertilized. The eggs are then transferred to Heath trays, and these trays are stacked in the incubation room. This is when the day in/day out work of the hatchery’s volunteer ‘feeders’ begins.

Their first set of responsibilities involves keeping the water in the egg trays as clean as possible. The stacks have fibre filters which must be cleansed frequently to remove silt. This task lasts about 3-4 months. During this phase, the failed or failing eggs need to be “picked” from the trays to keep disease from spreading.

Next comes the fry stage, where the fully hatched salmon are transferred to the Capilano troughs and now need to be supplied with food. Capilano troughs are long metal troughs with river water streaming through them. The hatchery’s temperature and lighting are set to reproduce the natural environment as closely as possible. However the fry must be fed. Every day of the week, volunteer feeders hand feed the fry in the morning and then set up the automatic feeders to run for the rest of the daylight hours.

Obviously when fry eat, they also poop, so the troughs need to be brushed to remove excess leftover food and droppings before new food is supplied. This job is done with the fry in the trough, so a gentle touch is needed. The volunteers are also carefully watching for any possible illness in the trough, removing ill fry, and minimizing the spread of disease to other fry.

For Pinks, the life in the trough is only about a week and for Chum closer to a month, before being released to the local streams and inlet entrance. Again, numerous volunteers participate in carefully selecting good spots in the creeks and introducing them to the real wild.

For Coho, who need to linger in fresh water for a year, a few extra steps are required. Initially they are also moved to and cared for in the Capilano troughs where they stay for a couple of months at least. At a certain size they need more space and need to be in deeper and wider containers – the juvenile tubs. At this transfer point, in order to “mark” them as hatchery fish rather that the natural wild version, a tiny fin, the adipose fin, is carefully and painlessly “clipped” off by yet more volunteers. This clipped fin helps anglers determine if their catch is fully wild (fin still on, and thus required to be released) or a hatchery release (no fin). Once clipped and counted, these Coho are moved to the big tubs to live a full year, under the same care and feeding regimen.

With any luck all our releases will remember the spa-like treatment they received via our hard working volunteers and will return to Mossom Creek to continue the salmon cycle of life. 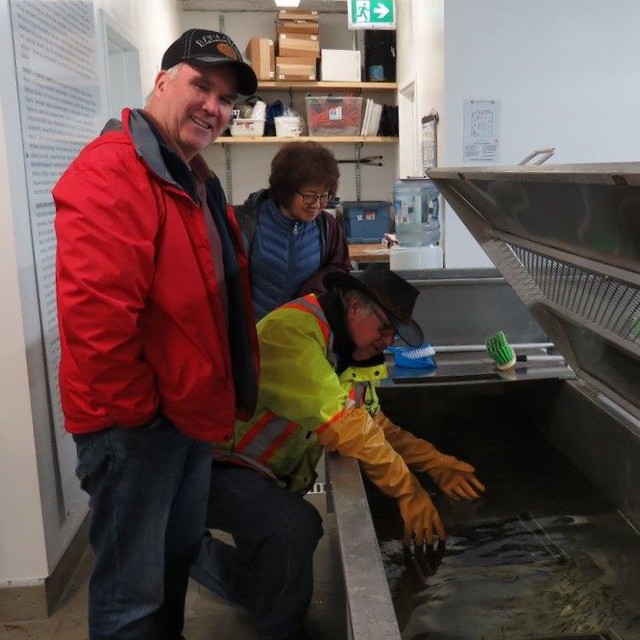