Another milestone has been reached since the reconstruction of Mossom Creek Hatchery.  The first set of eggs, raised in the new facility, have graduated to the ‘Capilano’ troughs where they will spend another week or so before being released into the estuary.

This batch (some 34,000 Pinks) have been in the incubation room since they arrived here as eyed eggs mid December.  Having successfully progressed from eggs to alevins and now fry, they are a sure sign that the Hatchery’s new equipment and facility are providing just the right environment for successful incubation and rearing…along with the excellent operations management of Neil Laffra and his crew of dedicated volunteers.

At this point their eggs sacks have been fully absorbed, their belly slits have sealed, and they are ready for the ponds (Capilano troughs).  They now need feeding and stabilizing and then are quickly ready for release.

Last Wednesday, a group of volunteers joined Neil and Scott Ducharme (Department of Oceans and Fisheries) to physically move the fry from the incubation trays to the troughs.  This is a delicate procedure as they are easily stressed.  When stressed they will not feed and the mortality rate rises.  In preparation, Neil left them undisturbed for the past three weeks as they neared readiness.  The team then carefully submerged the trays of fry in the troughs.. Once in the water, the tray lids were removed and the fry swam to the top (some with a little encouragement from the volunteers).  This first swim is critical as the fry need air to fill their buoyancy bladder so that they can maneuver underwater.  They are now being fed (manually in the morning and then with the automatic feeder during the day) and are becoming acclimatized to swimming freely.  In a week or so they will be taken down to the estuary and released.  From there, they will begin the arduous process of managing in the wild, with some returning to span in Mossom in 2 years.

Next to be “ponded” will be the chum fry, also released a few weeks later, quickly followed by the coho who spend a full year in the round Coho Tubs.  Congratulations to all the many Mossom Creek volunteers as the first ‘post fire’ graduates swim away. 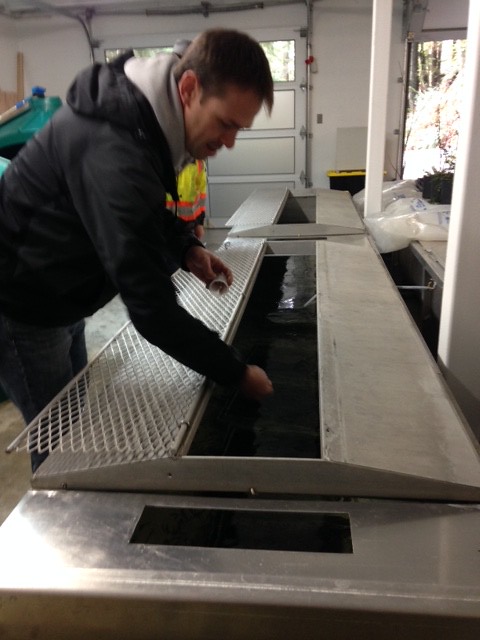